Lenovo ThinkBook Plus A rather unusual-looking Lenovo laptop was leaked over the weekend. Coming to us via reliable and prolific gadget leaker, the laptop is reportedly part of the ThinkBook range and will sport a 17-inch screen..along with a smaller display where a number pad would normally be on a keyboard.

Lenovo ThinkBook Plus A stylus strategically placed on the smaller screen implies it will likely be a touchscreen, allowing users to write, draw or doodle as necessary. Whether the main display also comes with stylus support is as yet unclear. 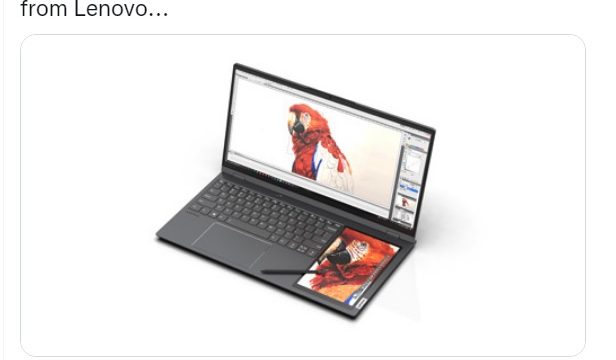 The leaked photo doesn’t come with any specs or availability info, but it’s safe to assume this new ThinkBook Plus will be announced at CES 2022 in January. Lenovo announced the ThinkBook Plus Gen 2 at this year’s CES, though that model featured a secondary e-ink display on the lid.
It is unclear when this laptop is coming out, but since Lenovo usually unveils new Thinkbook Plus notebooks during CES, we can expect to see it in January 2022.
It appears that the second screen is being used to draw on an image on the laptop’s main screen, almost like a drawing tablet. Despite the large secondary screen, the laptop includes a complete keyboard and a trackpad along with an extra-wide main screen. The image also shows a stylus lying on the second screen, which will likely be included in the retail package.

As with any leak or rumor, we’d suggest taking this news with a pinch of salt until Lenovo decides to make it official. In fact, just because a device is announced, doesn’t mean it will ship to customers – we’ll just have to wait and see.

This website uses cookies to improve your experience while you navigate through the website. Out of these cookies, the cookies that are categorized as necessary are stored on your browser as they are essential for the working of basic functionalities of the website. We also use third-party cookies that help us analyze and understand how you use this website. These cookies will be stored in your browser only with your consent. You also have the option to opt-out of these cookies. But opting out of some of these cookies may have an effect on your browsing experience.
Necessary Always Enabled
Necessary cookies are absolutely essential for the website to function properly. This category only includes cookies that ensures basic functionalities and security features of the website. These cookies do not store any personal information.
Non-necessary
Any cookies that may not be particularly necessary for the website to function and is used specifically to collect user personal data via analytics, ads, other embedded contents are termed as non-necessary cookies. It is mandatory to procure user consent prior to running these cookies on your website.
SAVE & ACCEPT